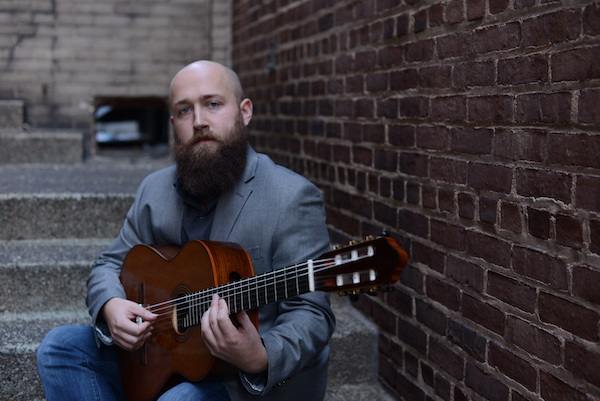 Open Mic is a great opportunity for established and novice performers—singer/songwriters, bands, vocalists, comedians, poets, storytellers—to practice and share their talents. It’s also a wonderful opportunity for audiences to experience a special evening of talent.

Policies
Two song or 10 minute limit for each performer
Time slots are reserved on a first come, first served basis
You must be present to sign-up (No one can sign up for you)
The Kennett Flash supplies a complete back line for bands (drums, bass amp, guitar amp and keyboard)

Zachary Grim enjoys a multifaceted career in performance, teaching, and research. His programs, which focus on the music of the 20th and 21st centuries, have led him to collaborate with variety of venues and organizations such as the Newman Center for the Performing Arts, Society of the Cincinnati, Bethlehem Bach Choir, Walters Art Museum, Pennsylvania Sinfonia Orchestra, Allentown Band, and guitar societies on both the east and west coasts. While Zachary brings his music to the concert hall, his mission as a 21st century musician to engage new audiences unfamiliar with the guitar’s vast repertoire has led him to listening rooms, clubs, music therapy centers, radio, and even living rooms to share these intimate programs.

An active teacher, Zachary directs the guitar program at the Baltimore School for the Arts, and is on faculty at the Community College of Baltimore County as well as Baltimore School of Music. Additionally, he has maintained a studio of private students since 2009. His students have become fine musicians and many enjoy performing careers of their own.  Previous teaching appointments include the University of Denver as well as a current teaching assistantship at Peabody Conservatory.

Zachary also has strong research interests in musicology and has given lectures and talks on a number of musical topics varying from music of Elizabethan England to popular music genres.  Specific topics include the socioeconomic environments that birthed extreme music genres, crossover compositional styles among 21st century guitar composers, the lute music of John Dowland, lute music of the English Tudor courts, and Baroque performance practice.