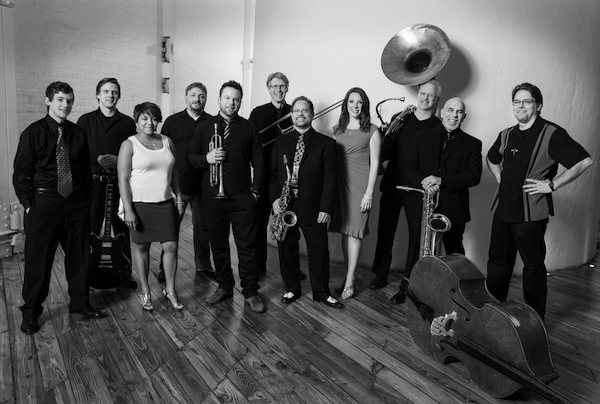 Established in 1996 as the Black Eyed Peas Brass Band, the current Hoppin’ John Orchestra has seen our name, our music and our musicians evolve and change in many ways over the years. For the uninitiated, Hoppin’ John is a tasty, tasty dish one of whose main ingredients is black-eyed peas. When we began, we modeled ourselves on the classic brass bands of New Orleans, especially the Dirty Dozen. We have adapted and evolved over the years and while a number of our tunes are still solidly in that style, our sets also include classic R & B from the 40’s and 50’s and even some “chamber jazz” transcriptions from the late 30’s and early 40’s. Our singers also help to ensure great variety and along with our notable local instrumentalists, never fail to excite and wow an audience.

The fluid nature of the rhythm section’s interaction in general is one of the great strengths and joys of this ensemble. There is much Jazz sensibility in our group as nearly all of us come from that school of thought and sound. There are plenty of opportunities for improvisation as well as through composed areas and pieces.

Our influences are many but in particular, the New Orleans street bands, Duke Ellington, the John Kirby Sextet and the Raymond Scott Quintette, the writing of Darius Milhaud and Ferde Grofe as well as arrangers such as Fletcher and Horace Henderson, Jelly Roll Morton, Don Redman and Bill O. Smith. The work of Mary Lou Williams and Brick Fleagle also inspire us.

We can provide anything from a New Orleans style street parade or entrance to a set piece performance either for parties, restaurants or community concerts. We’ve played all those events many times as well as weddings, a few wakes and even been on TV in New York. Local venues and performances have included: the Kimmel Center, World Café Live, Chris’ Jazz Café, Ortleib’s Jazz Haus and Sellersville Theater.