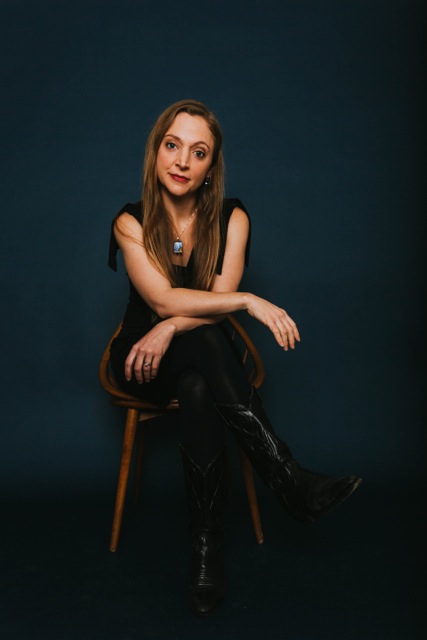 American Songwriter describes Eilen Jewell as “one of America’s most intriguing, creative and idiosyncratic voices.” The Boise, Idaho songwriter is one of a kind.

That singular voice springs forth from a woman of more than one mind, and she taps into many of them on Gypsy (August, 2019 Signature Sounds Recordings). By turns personal and political, pissed off and blissed out, Jewell’s first album of original material since 2015 expands brief moments of joy into lifetimes, and distills epic sentiments and persistent doubts into succinct songs.

Jewell seamlessly blends heavy electric guitars and dirty fiddles on the rollicking country rocker “Crawl” with the sweet and understated horn section of the tender “Witness. “79 Cents (The Meow Song)” skewers sexism and discrimination with pointed humor over a circus bed of musical saw and horns.

Longtime fans who love Eilen Jewell in classic country mode will delight in the pedal steel driven “These Blues” and the sole cover on Gypsy, “You Cared Enough To Lie,” written by fellow Idahoan and country legend Pinto Bennett.

Rather than pulling artist and listener this way and that, the tensions within and between these twelve tracks propel Eilen Jewell’s eighth studio album forward as a remarkably cohesive full-length.

Philip B. Price is a musical polymath, best known as the lead singer/songwriter of chamber pop luminaries Winterpills since 2005. But his sprawling and emotive songbook stretches further back into the late 80s and draws on minimalist and jagged art rock, bedroom lo fi pop, power pop, 70’s singer songwriter and outsider folk.

Bone Almanac, his first solo album since 2004, is a minimalist, largely acoustic album of striking intensity. Playing all the instruments and recorded in just over 4 days with producer/engineer Justin Pizzoferrato (Sebadoh, Kim Gordon, Pixies), Price opens up his internal dialog about death, memory, rebirth, insects, immortal flowers and environmental collapse, while sidling up to John Fahey, Neil Young and Jeff Tweedy.

Says Grant Lee Phillips: ‘This is an album that operates on a deep level, to be experienced and felt in the heart and in the bones.’

Like you, we’re music fans. For more than two decades countless fellow fans and musicians have joined us in building a community focused on music discovery and connecting artists with new audiences.

WXPN provides an unparalleled musical listening experience featuring contemporary music from many genres including rock, indie, folk, blues, R&B, and alt country. Our playlist is broad and comprised of international, national, and local artists ranging from brand new on the scene to legendary in stature.

WXPN is a member-supported radio station and nationally-recognized leader in Triple A (Adult Album Alternative) music programming. We are a non-profit 501(c)(3) operation serving the Delaware Valley and Central PA areas. While our broadcast license is held by the Trustees of the University of Pennsylvania, we are financially independent and rely solely on the support of individuals who believe in our mission.

We focus exclusively on delivering the needs to the community of music fans and artists we serve.